Nice article in the paper. 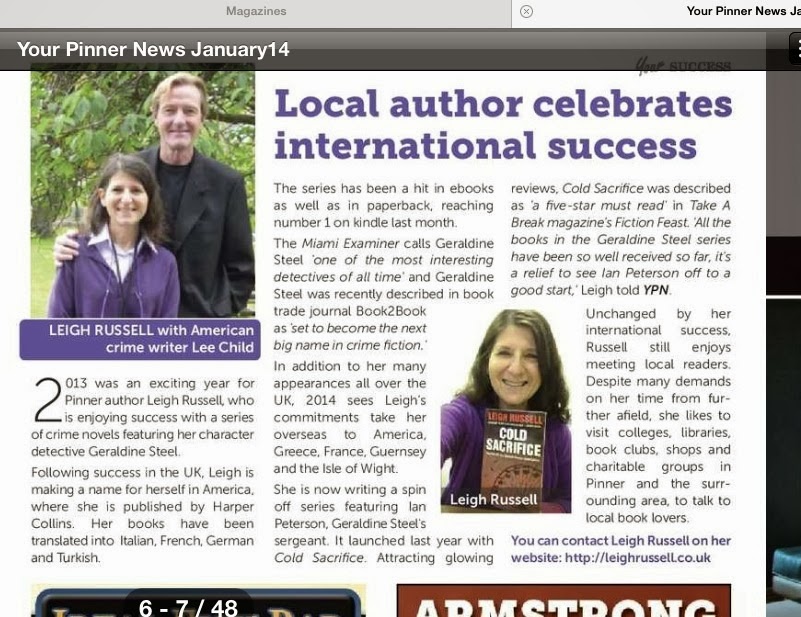 It seems to me that a passionate commitment to justice is one of the reasons crime fiction has such a huge and enduring appeal. However disturbing the events depicted in a novel, we know that by the end of the book some sort of moral order will be restored. But, as Geraldine Steel's sergeant, Ian Peterson, says, 'The act of murder signified so much more than one terrible death; it triggered worlds of unseen suffering.' In fiction, as in life, it is easy to overlook the other victims in a murder. Because we all know that when someone you love dies, part of your own life is irretrievably lost. A murder affects not only the individual who is killed, but everyone who knew them and cared for them.  And for many of the characters in my books, life has to go on. In my writing I try to consider those characters who are left behind to suffer in the wake of a tragedy.

My detective, Geraldine Steel, is driven by her passion for justice. 'Just because the dead have no voice, doesn't mean they have no rights,' she says. Acting as a kind of advocate for murder victims, she is focused on tracking down their killers. Of course, as in life, the resolution of Geraldine's cases is not always completely straightforward. Not all of the killers she brings to trial are purely evil. They may be crazy, damaged people. In some ways they are also victims, of society, of their upbringing, of mental illness or drugs. But Geraldine is unwavering in her commitment to justice. Having seen the bodies of one killer's victims, 'She didn't want to understand him. She only wanted to know he was securely behind bars so he couldn't destroy more lives.'

See your name in print

How do you think Geraldine Steel spent New Year's Eve? Post your idea on Geraldine Steel fan page If your idea works it may appear in a future book. Your help will be acknowledged and you will receive a free signed copy of the book.
Posted by Leigh Russell at 03:59 No comments: