For the first time in history, we are able to sustain friendships, and engage in conversations with groups of people, all over the world. I have friends in countries I've never visited, on every continent. Some of them are people I met and subsequently connected with online when they moved away. Others are people I first met online, who have become good friends. All of this has become possible through the advent of social media. To begin with, these online contacts didn't seem like real people at all. The first time a Facebook friend of mine turned up at one of my book signings, it felt surreal meeting her in the physical world. Since then many of us have met in the real world, as readers often come along to my events, sometimes travelling long distances for a signed book and a chat. It's always a thrill meeting people who read my books.
The only problem with social media is that it's so addictive! I frequently pop over to Facebook to reply to comments on my latest post, or see who else has been posting. Twitter is another site I frequent, putting up a tweet or responding to other people's comments. I've connected with some interesting people there as well.
So we are living in interesting times, in terms of human relations. We have our family and friends in the real world. Next are our virtual friends, real people we connect with via the Internet. Finally, there are the fictitious characters we read and write about. Whether real, virtual or fictitious, any of them can become our friends, and any of them can confound our expectations. The characters I create often surprise me. As an author, you might think I would be able to control my characters well enough to avoid them catching me off guard. They may be unpredictable to a reader, but they should not surprise whoever created them. As other authors will confirm, this is not always the case. My characters sometimes deviate from the paths I map out for them. That can be frustrating, but it is also part of the fun of writing, making the process more organic and creative. Like real people, they can have minds of their own.
Leigh Russell is published in English, and in translation throughout Europe. Her Geraldine Steel and Ian Peterson titles have appeared on many bestseller lists, including #1 on kindle. Leigh's work has been nominated for several major awards, including the CWA New Blood Dagger and CWA Dagger in the Library, and her Geraldine Steel and Ian Peterson series are currently in development for television with Avalon Television Ltd.
Journey to Death is the first title in her Lucy Hall series published by Thomas and Mercer.
Links to all Leigh's books can be found on her website http://leighrussell.co.uk
Posted by Leigh Russell at 08:30 3 comments:

Be Careful What You Say!

I've always been fascinated by the power of language. It's a very strange phenomenon, when you stop to think about it. We open our mouths and make peculiar sounds which somehow convey thoughts and feelings from inside our brains into someone else's mind. How does that happen?
Of course, it doesn't always work.
'We're packing in the travels this year,' I said to my husband.
He looked at me in surprise, understanding this to mean that I wanted to see an end to our travelling. What I intended to say was that we were cramming in a lot of travelling again. Since embarking on my new Lucy Hall series, our usual annual travels to all around the UK and Europe have increased, taking us away more frequently and further afield as far as the Seychelles and New Orleans.
Once you start to consider the quirks of our language, instances come easily to mind. What, we might wonder, is a 'civil war'? In battle do the combatants politely ask permission before shooting one another? And wouldn't it be nice if people's appearances were judged in the the same way as chances, given that 'a fat chance' is the same as 'a slim chance'.
There are many instances of ambiguity in literature. Some are deliberate, as when Shakespeare's witches chant 'Fair is foul'. Others are clearly not deliberate. In Thackeray's Vanity Fair, a character reports that 'he and I were both shot in the same leg.'
One of my favourite illustrations of the ambiguity of language is the child who was asked in a test to 'Take 7 from 93 as many times as you can.' The child answered 'I get 86 every time.'
And the advertisement that claimed 'Nothing acts faster than Anadin'.
Ambiguity is not only created by words. The surprisingly popular book 'Eats shoots and leaves' gives us many examples of ambiguity created by punctuation.
A woman: without her, man is nothing.
A woman, without her man, is nothing.
Thinking about ambiguity is entertaining, but it's also a reminder to us all to be careful how we express ourselves. Thoughtless words can not only be unintentionally hurtful or insulting, they can change the meaning of our intended message.
Posted by Leigh Russell at 02:22 2 comments:

What's in a Name

It feels like a long time since I last posted here, although it's only just over a week. Actually, a lot has happened since then, including on the blogging front, but just not here. Let me explain.
My Lucy Hall series launches soon, with the first book, Journey to Death, published on 9th February. That means there has been promotional activity, including writing some guest blog posts. So far in the last ten days I've written five, three for my PR team in the US, and two for the UK. So I've not really had time - or ideas - to write about here.
Being invited to write posts for other people's blogs is flattering but it's not as relaxing as writing here. I like to do a little research and get a flavour of the other blog, if I don't already know it. Often the topic they invite me to write about takes needs thinking and planning. It all takes time.
And then there's the next Geraldine Steel which I was hoping to finish before I receive the edits for the second Lucy Hall. The WIP is progressing slowly. More a PIP* than a WIP. All the activity surrounding the launch of my new series is distracting. I am very excited about the launch, but also concerned.
Where my police procedurals begin with a murder, the drama in my new book builds slowly. It may be too slow for some of my existing fans. Was it a mistake to publish Journey to Death under the same name as I used for my other series? Some reviews are already expressing disappointment that Lucy Hall is not like Geraldine Steel. If I had published my new series under a different name, it would have avoided such comparisons.
At the time, it never really occurred to me to use a different name just because I was trying something new. It seems a little disingenuous to pretend to be someone else. After all, it is still me writing the Lucy Hall books. Yet other authors write under different names, and I do understand why. As Evelyn Waugh, among others, wrote:  'Comparisons are odious'.
I like to trust that people will read Journey to Death with an open mind. But perhaps, in being open about my identity, I am inviting comparisons between my protagonists.
Journey to Death is published on 9th February. Wish Lucy Hall good luck! 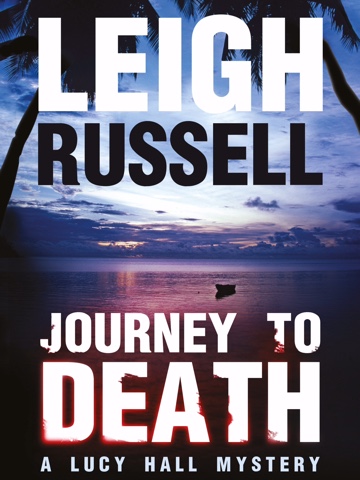 http://www.amazon.co.uk/Journey-Death-Lucy-Hall-Mystery-ebook/dp/B014KVMWQ4/ref=tmm_kin_swatch_0?_encoding=UTF8&qid=&sr=
*Procrastination in Progress
Posted by Leigh Russell at 02:26 4 comments: