Not so long ago I was amused by the horrified reaction of a class of teenagers, when asked how they would cope if the entire world wide web crashed. 'What? No internet?' they chorused, aghast. They genuinely couldn't conceive of such a world. How rapidly things change. These days I am so dependent on the internet, not being able to access my website sent me into a state of panic, just like the teenagers I had scoffed at not so long ago.

It reminds me of a novella by EM Forster, published in 1909. In the story Forster posits a utopian  society where people live in a machine which does everything for them. The machine feeds, clothes, cleaned and entertains them. People's limbs have withered because they don't have to do anything for themselves. All they do is lie in their pods enjoying themselves... The story is called The Machine Stops.

After my experience with wifi I upgraded my ipad to 4G which offers the option of using wifi or 4G to access the internet. In the Apple store, the young assistant chatted to us about back ups. 'What you need is a Time Machine,' he said.

Barely recovered from inadvertantly straying into the realms of E M Forster's The Machine Stops, I seem to have wandered into the imaginary world of H G Wells' The Time Machine. I wonder if those early science fiction writers realised quite how prescient they were.

There's the real and the virtually real... and then there's the surreal. These are just three of the many levels of 'reality' that exist side by side, distorted through the prisms of dreams, imagination and other kinds of insanity. What is new is the constant and instantaneous interplay of these kinds of reality.

A lot of my time is spent living in imaginary worlds, those I invent myself and those created by other people. I try to keep the two separate. My characters are never  based on real people, and unlike many other authors, I don't find my ideas in true crimes. But other kinds of reality impinge on all our lives these days.

Last year Belvedere Books in London hosted a launch party for Cold Sacrifice, the first in my spin off series featuring Ian Peterson. It was a lovely event, not least because many of my facebook friends came from all over the country, travelling hundreds of miles to attend. Although I had never met many of them before in the 'real' world, they had become good 'friends'. We had shared each other's problems and joys online, and had seen enough photos to recognise each other as easily as if we knew each other in the physical world. It was very exiting to finally meet them; the real and the virtual worlds were interconnecting in both directions, from the real to the virtual and back again.

Last week, after months of negotiations, I signed a contract with a major television production company who were interested in purchasing the rights to both my series. It was like signing my very first publishing deal all over again. Very exciting! Of course the contract arrived just as I was about to leave for the CrimeFest convention in Bristol, so I quickly printed out two copies before rushing to catch my train. The lovely director of the CWA who was at CrimeFest kindly witnessed my signature. When I posted some photos on facebook, friends and fans from around the world - as far afield as Australia - began posting their congratulations. The real and the virtual worlds are interconnecting again.

But this time another level of reality is involved, because I can hardly believe my luck. I've signed a contract with a television company. It's not just happened in the real world, reflected in the virtual world on facebook and twitter - it's surreal!

'What's so scary about smart girls?' Nicholas Kristoff asks, writing in The New York Times on May 10th. Sensible men might well reply that they have many reasons to feel scared of smart girls. But far from making a trivial sexist point, Kristoff is referring to the horror of teenage girls being kidnapped from school in Nigeria. The extremists perpetrating this atrocity want to sell young girls into slavery, rather than allow them a basic education. 'The greatest threat to extremism isn't drones firing missiles, but girls reading books.'

This is one of most shocking episode in human history. It attacks the core values that underpin every civilised society, values of equality, human dignity, liberty, safety, and the right to education. It has echoes of classic dystopian narratives that posit a world where every aspect of human behaviour is controlled by political rulers, including even our thoughts. In Fahrenheit 451 reading is prohibited and all books are burned as dangerous sedition. In Nineteen Eighty Four Orwell introduces the spectre of the thought police, who watch and monitor people's private thoughts. Brave New World imagines a world where people are controlled by drugs, sedated to prevent them from thinking for themselves. Without education books become superfluous, and the capacity for independent thought is stifled. Reading matters. Without the inspiration of other people's ideas, without words to think about our own ideas, we are no more than intelligent animals with an unused potential for abstract thought.

When we were about eleven or twelve, my school friends and I leafed through Lady Chatterley's Lover. We were hunting for the sex scenes which are so subtly written as to be almost impossible to spot. It's natural for children and young teenagers to be curious about sex. Needless to say, we were disappointed in DH Lawrence. How times have changed! When fifty Shades of Grey came out, I made no secret of my views. I have no problem with consenting adults behaving in any way they choose in private. That's no one else's business. But I worry that girls of eleven or twelve are now leafing through a book where a woman masochistically submits to a domineering man. Is this what young girls today are accepting as a role model? Is this how they believe they have to behave in order to attract a boyfriend? It's a far cry from Lady Chatterley's delicately worded sexual encounters. And it's very worrying.

What we are seeing is an extreme from of censorship. Creationists in the US refuse to allow their children to learn about evolution, different faith schools in the UK restrict their syllabus to suit their own beliefs and bigotry, and now children are being deliberately denied any education at all. There is an old saying, 'Knowledge is power'. Literacy gives us the power to determine our own path in life, the power to think. In being denied education, these young girls in Nigeria are being condemned to physical and mental slavery.

Where should we draw the line in deciding the influences to which our children should be exposed?
Posted by Leigh Russell at 06:10 2 comments:

When I heard the iconic and brilliant Ruth Rendell say recently that she doesn't judge people because, she said, 'I don't think we should', her words struck a chord with me. If there's one thing that infuriates me, it's people who are judgemental. I know that sounds like a judgemental statement in itself, but you know what I mean: the people who love to tell you what you ought to be doing, and how you should dress, behave, and generally live your life. Often these people are speaking out of genuine disinterested concern, a 'learn from my mistakes' or 'benefit from my experience' motive. But it's a slippery slope from disinterested advice to interference and ultimately bigotry. People who are convinced their views are 'right' are very dangerous. In a conflict, both sides believe they are right. It reminds me of a joke...

Judgements about other people shouldn't be arrived at on the basis of whether they agree with our own opinions or ideologies. But what about judging talent? To some extent this is unavoidable. It's part of life if we are going to enjoy the arts at all. I wouldn't place my own pathetic attempts at painting on a par with Van Gogh. Is that a judgement? However skilled I might become at playing the piano, I'll never attain the inspired genius of Mozart - or even be as 'good' as any mediocre musician. Is that judgemental? And if so, how do I set about judging other writers, as I am often invited to do, as the judge of a writing competition.

Recently the panel of judges for the Crime Writers Association Debut Dagger Competition met for lunch to agree on a winner. This prestigious international competition involves unpublished authors submitting the opening of their novels. The winner is likely to attract interest from literary agents, if not publishers. So winning this competition can be quite a significant step for an unpublished writer. As judges, we were sent a shortlist of just over a dozen entries, selected from nearly five hundred submissions. Over a long lunch, with much discussion, we managed to reach a concensus about the winner. We had some lively discussions about the other entries. The panel, which comprised a leading literary agent, senior editors from two major publishing houses, an independent publisher, and myself as a bestselling crime writer, were sitting in judgement on the entrants. Did we make the 'right' choice? Is there a 'right' decision? All the writers shortlisted were 'winners', to have reached that stage in the competition.

But there could only be one winner. I wonder what the old rabbi in the joke would say about that.

STOP DEAD HAS BEEN SHORTLISTED FOR THE PEOPLE'S BOOK PRIZE

Please vote for Stop Dead to win The People's Book Prize, where the winner is selected  by readers! Register by entering your email address - nothing more - and you will be emailed a password to use when you vote. It only takes a few seconds.  VOTING ENDS 20th May.  VOTE HERE 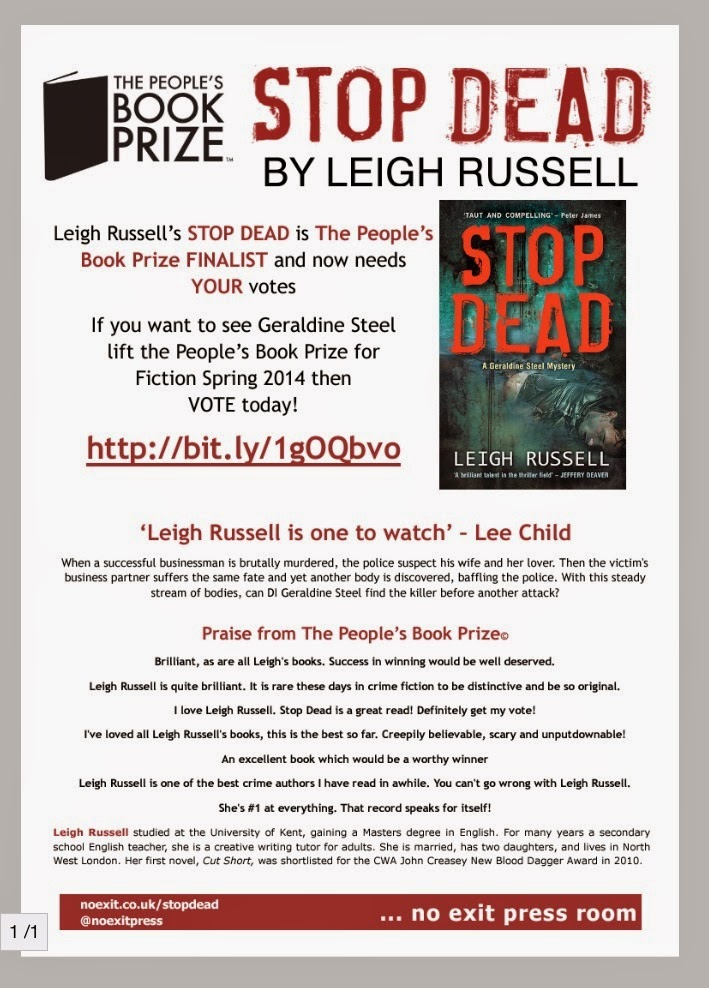 She dashed across the cold kitchen floor. The sound of his feet pounded in her ears as he raced down the stairs. It wouldn’t be long before he caught up with her. Her thoughts spun wildly. She had to get away. Hide somewhere. Anywhere. As the back door swung shut behind her, the evening air felt cool on her tears. She stared around in terror at the darkness, searching for somewhere to hide. The garden was overgrown with scratchy brambles. Frantically she ran across the weedy lawn, the dry grass prickly beneath her bare feet, forcing her muscles to keep going, faster and faster. Any second now he would emerge through the door behind her.

She darted into the shed. Bent almost double, she struggled to catch her breath. Her chest was burning. Her lungs felt as though they would burst. She was drowning. As her breathing slowed, she became aware that her legs ached painfully from running. They were shaking so violently she could barely stand.

He burst in, slamming the door against the shed wall. With a roar he launched himself at her, dragging her onto the ground. She hit her head as she fell, but she didn’t care. All that mattered was that he was there. She grappled feebly with him, but was no match for his vigorous assault. It was happening again and she was powerless to stop him.

Over his shoulder, through her tears she saw a figure hovering in the doorway, one hand raised in a futile gesture. But there was no point calling out for help. Scrabbling on the ground, her fingers closed on the handle of something very heavy. In that instant, she knew what she had to do. With a surge of adrenaline she raised the hammer as high as she could and swung it down.

Posted by Leigh Russell at 05:19 No comments: