How the World of Publishing has changed

My own personal writing process has changed almost beyond recognition over the past six years. To begin with I wrote longhand, in pencil. The first draft of Cut Short was written with no plans for the future. I had no idea anyone else would ever read it, let alone publish it. Certainly it certainly never occurred to me that it would become the first in a long running bestselling series, nominated for major awards and reaching number 1 on kindle. At that stage I was writing just for myself. Nine books on, I have abandoned handwriting in favour of typing my manuscripts. It's much faster, which is just as well as I'm now delivering two manuscripts a year to my publisher. The other big change is that I now write for my readers, not for myself.
The world of publishing has also undergone huge changes, which are ongoing. When my debut, Cut Short, first came out in paperback, in 2009  fellow author suggested I ask my publisher to bring it out as an ebook as well. At that time, I had heard of ebooks but wasn't quite sure what they were... The ebook duly came out about six months after the paperback and that happened again in 2010 with Road Closed. By the time Dead End was published in 2011, the ebook and print book were published at the same time. Sales of my books are huge on kindle, with all of them reaching the Top 10, and one even hitting the coveted number 1 spot. Sales figures of my print books are not quite so high, and that seems to be a trend throughout the publishing industry. I do wonder where books sales will go next.
Another change that has come about due to the internet is that it is now possible for readers to contact authors directly. A day never passes now without my receiving an email via my website, or a DM on facebook or twitter, from a fan of Geraldine Steel or Ian Peterson. It's lovely to hear from readers all around the world, and I always respond as promptly as I can. This is a bonus that simply didn't exist for authors just a few years ago.
My life as an author has changed so much since Cut Short came out in 2009. Who knows what further changes are in store for us?

Links to all my books, and facebook and twitter accounts, on http://leighrussell.co.uk, together with news, reviews, events and interviews
This post was first published in The Reading Thing blog

RACE TO DEATH is out now in paperback, and getting great reviews 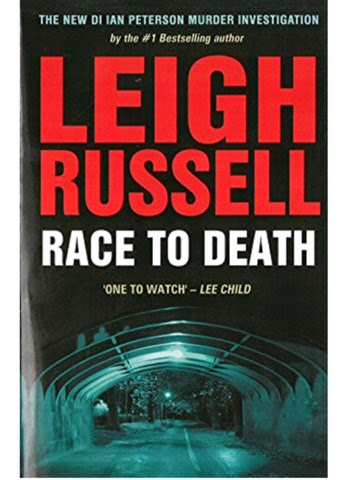 It is amazing how fast the world is changing in so many ways.
I am thankful that I have had the opportunity to meet you via the internet and read your awesome books.

Thanks, Val. That's very kind of you!

Hey, I just happened to stumble across your blog and read your post and I completely agree. I'm a murder mystery writer and although I have yet to publish, I have noticed so many changes in this world. It's crazy!!!
Great post!!
I'll try to read your books sometimes :)

Hey, I just happened to stumble across your blog and read your post and I completely agree. I'm a murder mystery writer and although I have yet to publish, I have noticed so many changes in this world. It's crazy!!!
Great post!!
I'll try to read your books sometime :)

Hi Emmi Lynn, thanks for stopping by and good luck with your writing.